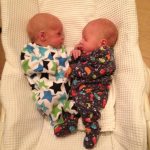 Hi there, sorry it’s been a while but you know what it’s like over Christmas!  So back to babies and I am now with twins.  The names have been changed to protect the young and innocent, only joking but we prefer to call them by their nicknames, Pinky AKA Rosie  and the Brain AKA Jake.  Jake being the smaller twin looks like he is plotting to take over the world, hence The Brain with Rosie as his sidekick Pinky. Anyhoo… the twins were born premature at thirty six and half weeks and were home by thirty eight weeks . Weighing in at under 6lbs/2.7kg meant they were able to start the usual feeding routine but instead of leaving them to wake naturally at night, I woke them every four hours until they had put on sufficient weight. Being premature meant that in the first few weeks of life they fed and slept only with no activity.

Now at five weeks old, Pinky and The Brain are quite sparky during the day after feeds, encouraging some play time . They are nearing 8lbs/3.6kg and no longer being woken at night and have just started  to drop their second night feed and wake only once in the night between 7.30pm and 6.30am.

Mum has been very lucky and has a great milk supply and was able to get the hang of tandem feeding almost straight away. This can be challenging for most twin mums but I believe it is the only way to feed twins if you want some down time. Keeping the babies on the same routine means they eat and sleep in sync which gives plenty of respite for parents.