What an amazing time I’ve had with these gorgeous girls!

I arrived when the girls were 5 weeks old and had barely woken up to the world.  Multiples are often easier to establish a routine as they are born earlier than a single baby and tend not to wake for feeds which enables  you to structure the feeds during the day. However feeding three babies single-handedly and keeping them in sync can be quite a challenge, not forgetting their older brother Barney aged three. 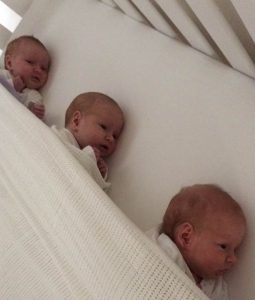 Luckily this household prepared itself for the task of having four children under five years by having a nanny and of course me for six weeks. That’s not to say that Mum wasn’t capable, far from it! She could manage the triplets without help, exhausting but doable. It was trying to deal with Barney’s enthusiasm for the girls and their toys that would fly around the room, whilst trying to rotate feeding three new-borns; that was the trickiest part!

My routine worked beautifully for the girls. The combination of a great routine, babies with no digestive, sucking or wind issues, meant the girls slept solidly through the night from 7 weeks of age. The girls were fed mostly breast milk by expressing. Rotating breast feeding would have meant the girl’s routine would not have been in sync. A synchronised routine was important for the family and their sanity, and of course there is the matter of having enough time in the day!

If you would like help with help with your baby’s or babies sleep routine, my baby sleep consultations include virtual, telephone and home visits.